THE SECOND COMING OF HUMANITY 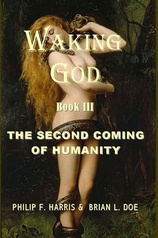 The Second Coming of Humanity is Book III of the WAKING GOD TRILOGY; Book I is titled The Journey Begins and Book II, The Sacred Rota. The series has been called “epic in scope,” and New York Times bestselling author Piers Anthony says, “It will make you think.” Focusing on ‘worn out religious dogma’ as one of the leading causes of human strife, the Trilogy turns the mythical world of good vs. evil on its head. Mantrella, a.k.a. Lucifer, is the champion of humanity, while the Archangel Michael fights to suppress human evolution by preventing the physical birth of the biblical Adam. Mantrella’s basic view is summed up when he says, “It is not about saving humanity, it never has been.” Human destiny is placed squarely on the shoulders of where it belongs: choice; our thoughts create our reality. The Second Coming picks up after the ‘end of the world’ in 2012. It shows how humanity has brought itself to the precipice where it must decide whether it survives or becomes a part of the current ‘6th great extinction.’ Further evidence and guidance of the ancient Tarot Code is revealed as the characters find themselves on their final journey to Jerusalem. Eli knows that the Battle of Armageddon has already begun, but not the one religion portrays as the End Times. Yet the trip must be made in order for the pieces of the Apocalypse to be revealed. Can Michael stop the physical birth of Adam? Do the forces of good and evil battle it out for humanity’s soul? Is Lucifer really the ‘great deceiver’ or is he humanity’s guardian? Who can truly save humanity, if indeed it needs saving? In The Second Coming of Humanity all that is hidden is revealed between the lines and beyond the words. Will the ‘dreamer’ awaken? You must decide! In these times of economic, political, social and religious upheaval, the TRILOGY is required reading, now more than ever!

This review is posted with permission of NYTimes best selling author, Piers Anthony. You can see it on his July'11 newsletter at hipiers.com/newsletter

I read Waking God III, The Second Coming of Humanity, the conclusion of a trilogy by Philip F Harris and Brian L Doe, published electronically by ALL THINGS THAT MATTER PRESS. Like the prior volumes it has heavy action interspersed by the religious theme. It begins with a dense summary of the prior volumes, then gets to the continuation. The essence, if I understand it correctly, is that the child, Adam, has been conceived, who when born will herald the new order. Naturally there are those who wish to prevent this child from being born and who don't hesitate at murder; the minions of Evil don't pussyfoot. His parents have to travel deviously to Jerusalem, avoiding killers. At one point a woman who looks like the mother runs to intercept the bullet meant for the mother, giving her life for the child. The novel concludes with alternate endings, and a series of maxims from the Da Vinci Prophecies from the Codex Atlanticus, such as "OF CRUCIFIXES WHICH ARE SOLD: I see Christ again sold and crucified, and his saints suffering martyrdom." I don't pretend to understand all this, but it's interesting, and I think exactly what would happen to Jesus Christ if he came again and tried to thwart the special interests who govern our society. Religion, the opiate of the masses, is fine as long as it doesn't interfere with business; that's as true in our day as it was in his day. So I recommend this for those who are more into adventurous religion than I am, who may be more competent to relate to its nuances. The authors obviously take religion and prophecy seriously.

The last book in an epic trilogy, with a heavenly-high bar already established by books one and two, "Waking God Book III: The Second Coming of Humanity" does not disappoint--in fact, it yanks the bar off its stanchions and hurls it into the stratosphere. Eternal arch-enemies, Mantrella (aka `Lucifer,' `The Morning Star,' and `Christ,'--yes, you read that last one correctly) and Michael come angelically and mightily head-to-head and wing-to-wing in the battle for the future of earth and the fate of the human beings that inhabit it. In this gripping and status-quo-challenging trilogy, Lucifer is not your enemy, and angels are not your friends.

That quote of Jesus, taken from the New Testament, is repeated thematically throughout "The Second Coming." Because, and this is where `traditional' `Christians' and the organized church will shout, "Heresy!" and, "Burn the authors at the stake!"--Adam, who was `put into a deep sleep,' is about to awaken. The `dream,' all that we know--the Buddhists call it "Samsara"--the illusion of our reality, created by us all with our thoughts as part of Adam's dream, is about to come to an end. If Adam awakes, humanity is reunited with the godhead and, returns to its birthright--as gods, higher than the angels.

Michael doesn't like that idea. One bit. He uses all his power, magic, and influence to stop it. Mantrella is using all his power, magic and influence, to thwart Michael and facilitate the rise to godhood that is humanity's birthright. He knows the complete DNA--including the `god' seed--can be `reborn' in a divine child if he can successfully have main characters, Andrew and Mara, mate ... they both carrying each other's latent half of the necessary seed that activates upon conception. If that happens, "The Fall" of mankind is reversed, man is returned to the Garden, and Adam awakens as the whole god-being you and I and He, were originally created to be by the I Am That I Am.

A supernatural, spiritual/inspirational suspense thriller, "The Second Coming of Humanity" is loaded with twists and turns, highly developed and multi-faceted, fantastic characters from all levels being and non-being, and has an ending that ... no, I can't spoil it for you. You must find out, understand, and manifest the ending, for yourself.

Authors Phil Harris and Brian Doe spin this tale with crisp, compelling, no frills and gutsy prose, along with poetic and deep passages that transport you to other-worldly realms--then smacks you right back dab in the middle of `reality'--or is it? In the end, it is up to you, to us, to awaken and create our own reality. The book gets to you. It pervades and inundates you. And it makes you, as you compulsively turn each of the final pages, wonder ... just who you--and we--really are, for god's sake?

- Marvin D Wilson, author of "Beware the Devil's Hug," "Owen Fiddler," and "I Romanced the Stone (Memoirs of a Recovering Hippie)"

The Second Coming of Humanity is Book III of the WAKING GOD TRILOGY by Authors Philip F. Harris and Brian L. Doe from All Things That Matter Press.

This is one of those books that you want to take with you on vacation, or if you know you're going to be waiting at the airport for a while, or waiting anywhere. If you have very strong will power, you might put it beside your bed or next to your reading chair, but once you start it, it will be very hard to put down.

The authors have crafted a well written, well thought out spiritual thriller in the tradition of "The DaVinci Code." Or it may be more accurate to describe it as "The DaVinci Code" meets "The Celestine Prophecy." Filled with mythical and biblical characters playing rather different roles than expected, this spiritual thriller will keep you going till the very unusual end. You don't have to have read books I and II since the authors summarize for you at the start of this one, but do yourself a favor and get those also. You're going to want to read them.

Review by Tom Averna author of the upcoming spiritual fantasy series, "The Once And Future Wizard: The Awakening"

The Second Coming of Humanity is indeed a wild ride. Set against the backdrop of the impending 2012 shift, this spiritual thriller will make you question everything you thought you knew about reality. Drawing from both ancient and contemporary wisdom teachings, Doe and Harris not only find new ways of interpreting old insights, they develop fresh insights of their own, all the while turning misused dogma and outmoded stereotypes on their heads and creating the mental space for the reader to discover his or her own truth between the lines. This truth will certainly be best discovered if you read all three books of the Waking God trilogy, but The Second Coming of Humanity is also an excellent stand alone. If you liked the mental trip you found yourself on with the The Matrix or The Da Vinci Code, you'll want to, as author Sandy Cohen suggested, fasten your seat belt at least one more time. There is still a very important destination that awaits you, and The Second Coming of Humanity is just the vehicle to take you there.

A multiple ending depending on individual choice...is that an apocalypse or the redemption? Harris gives us the questions and the answers. He presents in towering prose both a logical and magical vision. It's as if his characters live in simultaneous worlds. This is pretty cool, if you think about it. Imagine, to live life in the byways of both hope and despair, and to transform confounded feelings into powerful life-changing choices. To trespass in the tributaries of the Mississippi, creating both floods and spillways to avoid catastrophes! This is a prescient gift, and, also, a weighty responsibility--this readable, thoroughly enjoyable maze that the author either created, imagined, or saw one night in freakin' Nebraska. The spiraling visions of time tell us we have time, but may exhaust ourselves in deciding...and we must decide.. The Harris spillway is ultimately a kaleidoscopic master on a carousel ride of choices and gentle reaches for the gold ring despite despite momentary falls off our high horse of horrific happenings. It is a vision that this gifted author has been carrying on both a martyr's back and on wings of eagle's might. What allows you to sleep, afterward, is the thought we can decide the path of our own destiny...and that becomes the path to darkness or to light. The martyr's cross, after all, is just a shell of polarity that can be made right. The Harris alter vision is perfectly conceived, beautifully written and always..inspired.

MORE REVIEWS CAN BE FOUND AT THE FOLLOWING BUY LINK: